We have a Network of professional and scientists excited to work with us once we get started ! In the mean time, the project is being carried by: 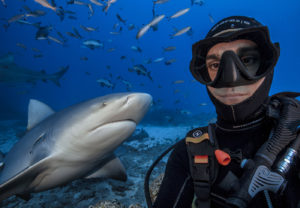 Thomas started working with sharks in 2007. It was not his first shark encounter, which happened in 1994. Since 2007, Thomas did his Master then PhD working on sharks, becoming a Dr. in Biodiversity, Genetics and Evolution. He published several scientific papers, one of which has the largest sample size to date with 1022 shark genetic samples used. He visited several countries to pursue his quest to better understand sharks, including the Bahamas, French Polynesia, New Caledonia, Fiji, Tuvalu, Oman and others. Thomas also made several apparition on TV and radios as a shark expert, and was part of the movie project Eqalusuaq as talent and president of the SEDNA NGO (Services and Expeditions for the Discovery of NAture).
After his PhD Thomas worked as a Project Leader in Fiji to start an ambitious project: Creating a sustainable shark-based tourism operation that was not only profitable, but also allowed for research projects, education, conservation, community projects, governmental collaboration, as well as being good for the sharks, the ecosystem, and allowing the local and national economy to grow. Thomas is also an experienced diver, a scuba-diving instructor, freediving instructor, commercial diver, rebreather diver and other qualifications such as Shark specialty diving instructor. He uses his connection with the Ocean to take underwater photographs, and became an award winning photographer, winning over 15 prices including the First place at the prestigious International Underwater Festival in 2008. Thomas is one of the rare person on the planet who spent countless hours underwater with wild bull sharks, studying their personalities, behavior and interactions, and ultimately developing his own techniques allowing to train the sharks the way he wanted.
Thomas website can be found here: http://www.thomasvignaud.com
But if you are interested in the photographs, Instagram has a beautiful showcase: https://www.instagram.com/thomasvignaudphotography/ 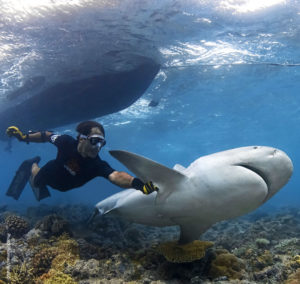 Eric main focus is on sharks’ behavioral ecology with an emphasis on attacks on humans (forensic) and shark conservation. He is approaching those issues through the biology and ecology of sharks (behavior, role and resilience), through an economical approach (Total Economic Value and contribution to ecosystem services) and the Eco-anthropology (shark perception in indigenous vs modern societies). Eric also work on tropical fish ecology (incl. ciguatera), marine mammals and freediving.
Eric’s work and talent can be better appreciated on his personal website: http://www.ericclua.com/